On Monday we were sitting outside the harbour when the fog came in and as we were waiting for our guests I  got a call from my cousin saying that he nearly hit a Basking Shark as he did not see it until the last second due to the fog.
After asking where he was I decided to go and have a look. After a few minutes I realised I was wasting my time as it got thicker and thicker and you could hardly see your hand in front of your face never mind find a basking shark.

We gave up and headed back to the harbour. At least he gave me all the readings, times etc. Oh well next time hopefully.

We never made it out either and who could blame anyone not wanting to go out in that kind of weather.

A change of weather and a change of sightings. A good few Arctic and Great Skuas passing through. A dozen or so of lingering Guillemots. Gannets galore and a single Puffin.

We had a single Sooty Shearwater near the Longstone Island which is always a pleasure to see.

On Thursday we saw 6 Bottlenose Dolphins and a good few boats got good views too. It was really nice to see a firm favourite of ours “Barracuda” swimming past the boat and they were really showing off to. Some were tail slapping the water and others were jumping clean out of the water. When you here people saying “Oh Wow” a lot you know it was a good jump.

I never get tired of seeing this and its really nice to see the smiles on people’s faces which makes it extra special.

Fingers crossed the weather keeps up and we start to see loads so I can keep on blogging. 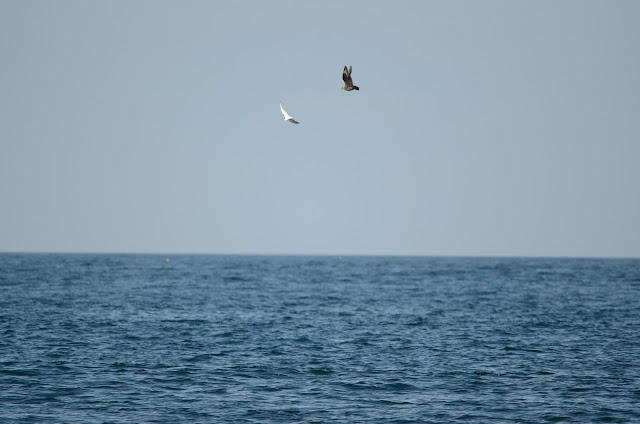 Oh and did I mention we had our first two seal pups born today. That will be my next post.

OVER AND OUT
Sharing...