The seal season is well underway now and at the last count there was 1,227 seal pups around the islands and that’s 102 more than this time last year.

On Saturday there was a gap in the weather and he seas were calm enough to get out. With a few guests on board we headed out to the islands to see what was about. I was hoping to see some Little Auks but I was out of luck.
When we arrived at the islands the seals were scattered everywhere and there were loads of seal pups for my guests to see.

We stopped the boat near Longstone Lighthouse to look at some more seals, we saw a seal that stood out like a saw thumb among all the other seals as it was as ginger as can be. This seal is from Donna Nook or Blakeney Point as all of our seals are born on the rocks, were down there they are born on the sand which sometimes colours the seals skin.

After that we steamed across to the Brownsman Island where there were more seals but this time we saw a mother with a new born pup. We must have missed the birth by seconds, but it was such a beautiful sight to see, that it did not matter that we had missed the birth. It was flat calm behind the island and the boat lay perfectly on the water as we watch the mother turn onto her side so that the pup could get some milk. As the pup moved closer to her mother, it slipped close to the water edge and then all of a sudden a bull grabbed the pup and dragged it into the water.
We all shouted “OH NO”, please don’t let this happen but the pup some how managed to claw itself onto the side and the rocks and pull itself out of the water.
The sigh of relief on my face and the guests was priceless. I have to admit I have never seen such a sight before and god knows why the bull decided to drag the pup into the water and I guess I will.
The pup did get away from the bull and the mother tried to encourage it further up the rocks, away from the bull and the incoming tide.
The relief around the boat was heart warming and as we left, the new born pup was enjoying some of its mother’s milk, so finger crossed this little pup will grow up fit and healthy.

The pictures below show the story but the look in the pups eye shows you how scared it was. 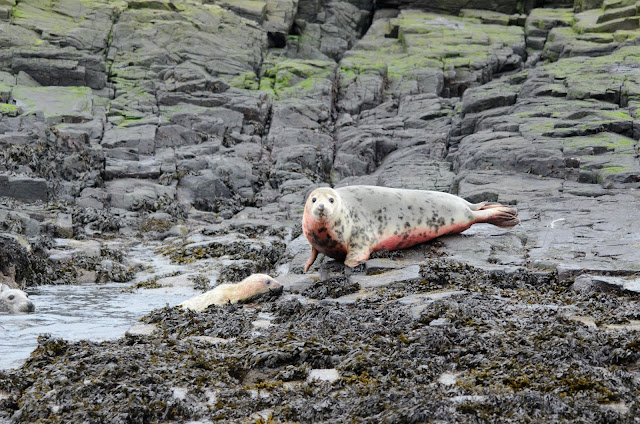