The Longstone Lighthouse, or Outer Farne as it was first called, is
situated on Longstone Rock, one of the Outer Staple Islands. A light was
requested for these islands by Sir John Clayton in the late 17th
century and by Captain J. Blackett in 1755. Unfortunately, both were
rejected as the Elder Brethren of Trinity House were unable to obtain
the consent of the affected parties to pay a toll for the maintenance of
the light.

However, in 1826 it was found essential for the
welfare of shipping off the Northumberland coast to construct a
lighthouse in the Farne Group on the Longstone Rock, which lies about 6
miles from the mainland on the westernmost side of the reef.

The Lighthouse,
designed and built by Joseph Nelson is a red and white circular tower
built of rough stone with iron railings around the lantern gallery. The
light originally came from the Argand lamps with 12 burners, parabolic
reflectors 21 inches in diameter and 9 inches deep. The cost of the Lighthouse and the dwellings was
approximately £4,771, the lantern alone costing £1,441.

The
island was a bleak situation to endure and the isolation must have been
terrible, often storms were so bad as to drive the family into the upper
rooms of the tower to seek refuge, the waves being so enormous that
they covered the living quarters.

Longstone Lighthouse is most
famous as the scene of the Forfarshire wreck and the exploits of Grace
Darling, a daughter of the keeper in charge. In September 1838 the
steamer Forfarshire, bound from Hull to Dundee, went aground on Harcar
Rocks, about a mile from the Lighthouse, when 43 people were drowned;
the stern portion of the vessel being split off and carried away in the
storm. The forepart, to which clung the survivors, remained fast on the
rocks. At daybreak William Darling, the keeper, and the fishermen ashore
saw the wreck, but the waves were beating against the rocks so much
that the fishermen thought it impossible to attempt a rescue and even
Darling hesitated. He was finally persuaded to make the attempt by his
daughter, with her as the second hand in the small lighthouse boat. On
reaching the wreck after a terrific struggle they brought back 4 men and
1 woman in their frail open boat and later a further four survivors;
all 9 had to be accommodated and fed at the lighthouse for 2 days until
the storm abated and they could be taken to the mainland. This gallant
action made Grace Darling and her father famous. The Royal Human Society
voted them its gold medal, the Government made them a grant and a
public subscription was organized.

The lighthouse has undergone many changes over the years, and the current accommodation was built in 1951 on the former site of the fog signal house that had been destroyed during the war in 1942. It was then changed to electric in 1952 and then it was converted to automatic operation in September 1990 and
is now monitored from the Trinity House Operations and Planning Centre
at Harwich.

Over the last 6 months the Longstone Lighthouse has been having a
major overhaul and the light has been turned off while the workmen have been been changing things around. Don’t worry, passing vessels would never hit the rocks as they anchored a Lightship (floating lighthouse) just a little bit further out from the Longstone to warn all passing vessels. Saying that, I remember when the Danio hit the rocks when the light was on.

Trinity House who own the Longstone have
decided to move into the 21st century and change the lightohuse into
solar power. When I first heard this I thought it would change the look
of the lighthouse and it would never be the same, but how wrong was I.
By looking at the lighthouse you would never know it had changed at all.
Only A few things have changed on the outside, with a few hand rails
but on the inside its seen a huge change.

The project included a major overhaul of all the electrical equipment, which is now obsolete and this will reduce the risk of failure in the future. This will also help reduce the amount of money they spend on fuel for the generators and will also be good for the environment.

A new design of the lantern has made it possible for them to use solar power, and instead of the light being visible from 24 nautical miles away and on 24 hours a day, it has been reduced to 18 nautical miles and only comes on at night time. This makes total sense and will save them a lot of money in the mean time and everything will be controlled from their base in Harwich.

So there we have it, the Longstone Lighthouse is now solar powered and I wonder what the darling family would have thought of this new technology. We will never know, but once again the longstone has changed and I suppose in the next 50 years something else will come along and it will all be changed again.

Here are a few pictures below and the last two pictures I took when the light was turned off. 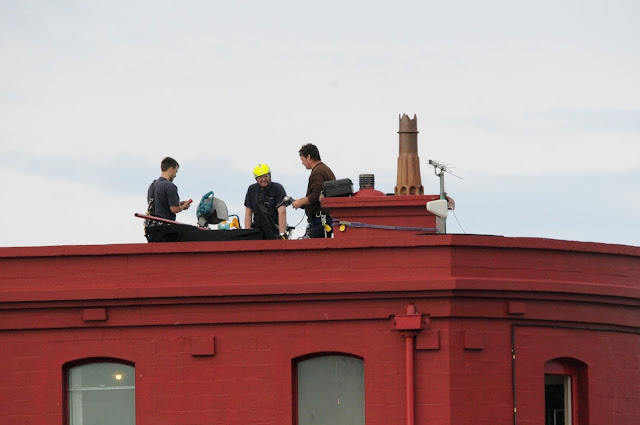