Skip to content
September 7th 1838 the Rescue Mission
William Brooks, the youngest Darling living at home, was away fishing at Seahouses when the shipwreck occurred. This meant that only Grace and her parents were in the lighthouse, at the mercy of the dreadful storm.
Grace, unable to sleep, was watching the storm through her bedroom window. She saw a large, black shape on Big Harcar Rock. Grace woke her father and with a telescope they studied the wreck for signs of life. They were none. Grace watched and watched and as daylight crept in around 7am Grace saw movement on the rock. There were indeed survivors of the wreck, two or three perhaps. William thought the sea was to rough for the lifeboat from Seahouses to set out, so he pondered what to do.
He knew the rocks and he knew the tides but was still not sure. Grace pleaded with her father to try and rescue them.
As Grace’s mother watched her husband and daughter push the 20 foot coble out into the sea she feared the worst.
William decided that he would go on the south side of the rocks and this would give him more shelter from the stormy seas. Grace and her father rowed the boat around Blue Caps towards Big Harcar defying the wind, swell and spray and made it to the wreck. William then realised that 2 trips woul have to be done.
William and Grace managed to get the boat close to the rock so that William could jump of to see the survivors. Grace held the boat while her father gathered together the weakest survivors and attempt to get them onto the boat.
I could imagine that it was a hard decision to make which ones he took first but he did take Mrs Dawson with him but her two small children were dead and persuaded to leave them on the rock.
I could not have done that if it was me but I suppose he did not want to lose another life. An injured man was next, but William needed some strong men to help him. He took John Tulloch and John Nicholson but this left Daniel Donovan and 3 others on the rock, plus the bodies of Reverend Rob and Mrs Dawson’s children.
They made it back to the Longstone and then he went back with the 2 survivors to rescue the remaining survivors. The 3 bodies were left on the rock until it was safer to collect them.
Can you imagine the mixed feelings between Grace and William. It would have been joy, fear and sorrow for Mrs Dawson’s loss, all mixed into one.
This is the report that William Darling sent to Trinity House 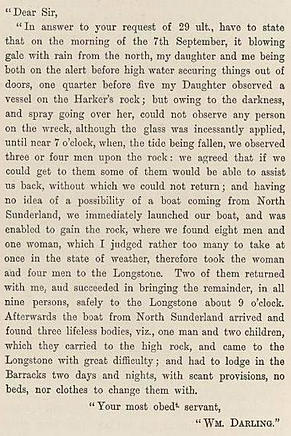 This is Grace Darling’s window she looked out of during that stormy night. 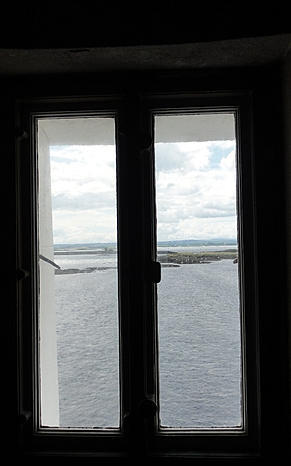 Today was 175 years since that famous day and the RNLI laid a reef on the water to celebrate our hero Grace Darling. We can not forget her father William either as he was a hero to.

They were going to try and row an old lifeboat out to the Longstone but the weather was to bad for them to do it. They however did row it out as far as they could and I have to take my hat off to the guys for doing it.

These are some pictures from today’s adventures.

The old and the new together as they come into the harbour.