The noise is unreal at the moment from all the seabirds and the noise level has increased as the chicks are calling at the top of their voices too.

Its great to see new life at the Farnes and doing so well too but as I write this blog the seas are terrible and it feels more like a winters day than it does a summers day. I do hope all the seabirds will be ok during this dreadful weather we are having. On a plus note the Farnes had its 1st ever mega bird pass through the Staple Sound today (29/06/17) a Black-Browed Albatross. This a mega bird and I bet the rangers who saw it will be having a party tonight and who could blame them.

The season is now ticking away and it will not be long before all the seabirds will be gone and another season is over. I don’t really like this feeling but I suppose I get it every year and you would think I would be used to it by now. Don’t get me wrong we still have a few week to go but we are starting to see gaps appear on the rocks now.

I have noticed this year that the Kittiwakes have done really well and they have had more than just one chick too.

The Guillemots have been jumping loads, which is great for all of our guests to see. Jimmy, (one of the lads that works for us) caught a jumpling on film the other day which was great to see. We also saw the Luecistic Guillemot again and it looks in really good health. I thought it would not survive but it seems to be doing just fine which is great news.

New Life is just a wonderful thing to see and its hard to believe that in a few years time they will be back looking for their own partners and starting their families too.

Nature is such a wonderful thing and every year it gives thousands of people enjoyment, including myself.

Lots of the seabirds are doing really well and they can become very aggressive towards other seabirds if they think they are going to harm their chicks.
The other day Andy (my crewman) and myself witnessed a shag trying to kill a guillemot as it must have got to close to her chicks. It was in some ways fascinating to watch but then in another way it was sickening. The guillemot got away but the fear in the other guillemots eyes as she was trying to protect her chick at the same time was awful. Lucky for her the shag just went back to her chicks and never bothered her but she must have been so frightened in case she did but then further along the cliff was a young razorbill peaking out of its mother wing thinking I’m glad I’m over here and not there.

There has also been lots of feeding frenzies going on which is great to see and it feeds lots of hungry seabirds too. The seals have enjoyed the sun and we have had some really nice sunset cruises too.

We also have had some great views of the Bottlenose Dolphins and their young too and they always aim to please. Its also great to see the smiles on peoples faces after they see the dolphins as its unexpected and most people don’t ever think they will see them in the uk.

Overall everything has been coming on nicely but lets hope this weather has not knocked them back to much. 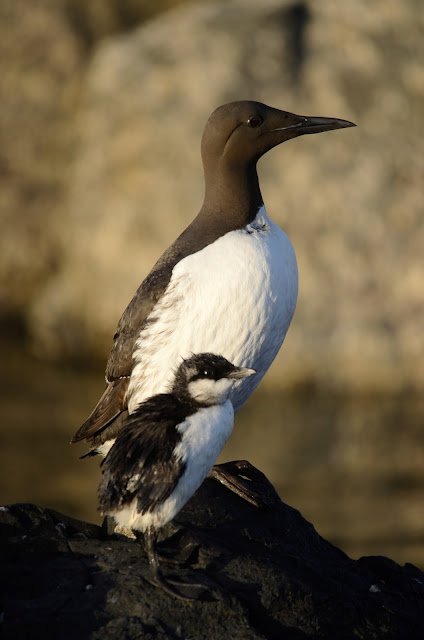 Once again thank you for reading
OVER AND OUT
Sharing...