On our trip the other day we were at the Brownsman Island when we saw a couple of jumpling just about to take that leap of faith, but as we looked around there was not just a few, there was quite a lot.
We watched one after another jump of the cliff faces. Some were not afraid, while others used the brains and took little jumps all the way to the water. We got a but carried away and before we knew it, we had been there for 15 minutes watching them. Well so did I to be honest and I am the skipper so I could have moved the boat if I wanted to but to be honest I did not really want to go, and I could have watched them all day.

The weather conditions were perfect for them and is probably the reason why loads were leaving all at once. Whatever the reason this did not matter to us as we were enjoying every minute if it and why not as its not everyday you get to see much and wonderful sight.

Here is a selection of pictures which will show the bravery of the jumpling’s.

Well maybe not. This little jumpling was behind his father.

It’s not a big jump son. Come on you can do it.

Mother tries to give it a little encouraging nudge

Not in focus but you can get the idea. 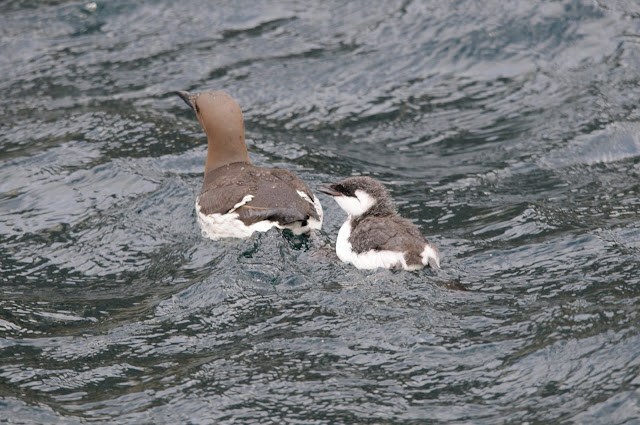 Off they go out into the north sea.
Don’t worry as the season is not over just yet as we still have lots of other seabirds around and there is still loads of Guillemots to see over the next few weeks. 51,000 is a lot to leave in one go.
Sharing...