We are nearly at the end of the breeding season and to be honest I just don’t know where it has gone to. The season has been a bit mixed but overall I think its not been bad at all but when the rangers finish crunching numbers we will know for sure.
Judging by what we see everyday I think the seabirds have done really well. We had that little blip near the end with the N.E. seas but other than that it seems to be ok.
The rain over the last few weeks has been a pain but the Inner Farne has only closed a few times this year which is great news.
Staple Island has been closed loads, with all the rain and the seas at the jetty which is really annoying but I suppose its the norm.

Anyway here are a few pictures of the seabirds growing quick and other getting ready to leave. We have also are seeing the dolphins lots again and they have been wowing us as well as our guests and hopefully we will see them all the way until the end of the season.

The Kittiwakes are growing fast now so it will not be long before the head out to sea. 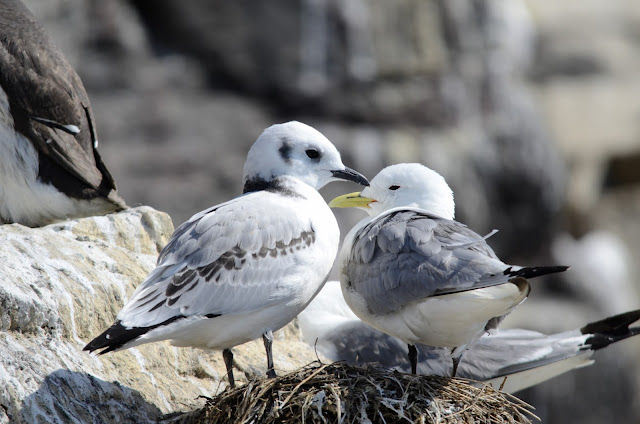 Young Kittwake with an adult.

Puffins are starting to get ready to leave now.

A seal enjoying the little bit of sunshine we have had this year.

Our diving boat enjoying some bottlenose dolphin action as they play with the bow of the boat.

A Puffin peaking over the edge of the cliff.

A Razorbill fly by.